We are delighted to share a blog written by student Hiba, from Roots Millennium Schools, Future World Campus, delivering a Global Goals project for the 2020-21 GSL Global Goals Competition. 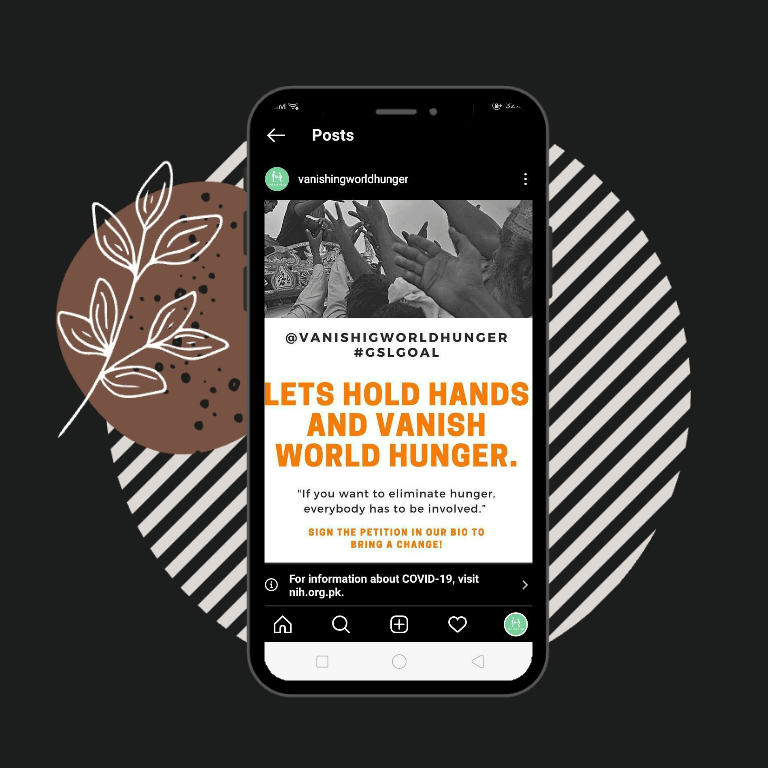 We are just typical 12 year olds 7th graders from Karachi, Pakistan, and our project is most commonly known as, VanishingWorldHunger. Let’s move back to the time when we first heard about GSL, we were so much into it that our minds were filled with thoughts related to GSL. When we first found out that we got selected to take part in Global Goals Competition, we were screaming with joy as we’ve always dreamed of taking part in it! It was the best day for us. Looking further into it, we started looking at the goals and researched a ton on each of the topics, but at the end we found ZERO HUNGER as the best goal for us. The thing we are focusing on; as you can clearly see, is to finish the destitute.

More than a quarter of the world’s population is left alone starving on the cold streets, cause of COVID-19. You might ask, how and why? Alright, Brace yourself for what I’m about to tell you. As COVID-19 struck the globe, every human being’s life took an unexpected turn. The extroverts who loved to socialize, suddenly became introverts who wouldn’t even dare to step out of their house. Employees with a low, unlivable wages went jobless, to the point where many people got evicted of their own houses during the worst circumstances when a person is intended to stay at home! At the worst days, many people have to stay outside, knowing the fact that they could contract the virus anytime and would have to face the consequences as they don’t have any other choice. Along with that, the judgmental and toxic society has been treating these innocent, needy individuals as if they are meant nothing and are worthless, without even knowing their background story as to why they are in this terrible state.

Why is our society so judgmental? Why is giving bad remarks towards a homeless person cause of their appearance normalised, even though it’s 2021?! You would hear a person call a homeless person “a lazy individual who can’t get a real job”, and nobody, I repeat, NOBODY, would even speak a single word. Why? Because it is normalised.

Our team is mainly focusing on changing people’s negative opinions about the needy individuals. They are humans too, just like us. Whether rich or not, we all have the same heart. Though our appearances might vary, we are all the same from within. We will try to be quite generous to the needy individuals and find every way to help them and fill their tummies. We are showing the world how easy it is to win a human being’s heart rather than insulting them.

I’m going to be really honest, taking part in Global Goals competitions taught me many things that I didn’t learn before. The journey of Global Goals Competition is better than anything in the world, you get to interact with projects from around the world, etc. As we first started, we took really small steps, as it was our first time ever taking part in Global Goals Competition. When I say small steps, I mean trying our best to inform as many people as we could about our GSL Project.

Unfortunately, it wasn’t really helpful as for us, so we thought to ourselves, why not create a social media page? Instagram? This was a pretty eye catching idea, so we went for it. We created an Instagram page with the username @vanishingworldhunger . Things weren’t as easy as we’d thought at the start, but as we started posting gradually, things took an unexpected turn! We started gaining followers as many people reshared our posts, which indeed, did bring a huge smile on our faces. Seeing numerous amounts of people supporting us was a pretty great thing to hear during the times when we had to deal with school assignments and stuff related to that.

After we finally got rid of online classes and got to spend winter holidays, we started working on something which would actually make an impact. When we were researching the topics, the one which we found the most interesting was opening a petition. We thought for a while, that posting won’t bring a big impact, so we had to try thinking of something which would be really help us and many people could learn about our project. At the start of our petition, our goal was 100 sign ups. To our surprise we saw more than a 100 kind hearted people who reposted and reshared our petition which made the sign up increase very rapidly. In just a matter of days, we actually achieved our goal! After achieving the goal, we changed the goal to 200 so the impact towards the young, innocent lives with big dreams could be more. Sign up to the petition in our instagram bio if you are volunteering to change the world by vanishing hunger!

Moving further, we were astonished when we saw direct messages from two different groups asking to collaborate! It was by far the most exciting moment for us! When we received the message notification, we clicked faster than an eagle catching its prey. We quickly talked about whether we should accept the partnerships or not, but at the end, we decided to accept them. We accepted proposals from JoyBox, and Seven Phl. Both of the projects are incredible and phenomenal projects, which are working harder than ever. We had loads of fun talking to them and discussing each teams duties- we were really excited and still are! Wishing the best, again for both the projects! :).

We have just recently made a Youtube Channel with the name of, ‘Vanishing World Hunger’. We recently uploaded a video so make sure to check it out! It is a spectacular, educational video, made by one of our teammates. We hope you like their hardwork and effort that has been put onto the video!

We haven’t done a lot till now, as COVID-19 really turned the tables on us. We wanted to go outside and try to create awareness but the virus simply said,”No”. Yes we couldn’t go outside but we can surely create awareness at school too right? Well that’s unfortunately a good ol’ no too. Our schools just opened a week ago after being closed due to COVID-19 for 2 whole months. So we started off with virtual work. We have a long journey to go through. Let us introduce our future plans for our project!

As the leader of the team project, I think the best thing to start off with hosting a presentation in front of the whole school. That way numerous amounts of young individuals could be influenced by our work and could support us throughout the project, which is indeed, quite obliging! Along with hosting the project, we would also try introducing the funds which can be given by the generous youngsters. The students would be allowed to give any amount of money they want. From a cent to 1$ to 10$, anything matters! With those funds, we would add some of our funds too, and buy extra sanitary products and snacks with the money we collected. We don’t only want to share the food with them, but also help them in saving themselves from the deadly virus.

About the actual food though, we would make fresh homemade food and then pack it to give it to the needy people! From my perspective, I assuredly think that this is a quite good idea and with this, we could actually feed them the food which we know wouldn’t actually get them sick. We have heard many cases of store-bought food, which sure does look mouth-watering from the outside, but from the inside, it is planning to give the victim food poisoning. In the poem known as ‘Friend’, you’d see the poet saying,”Oyster-studded roots, of the mangrove yield no finer feast, of silver bellied eels, and sea snails, cooked in a rusty can” See? This part means that something so luxurious can actually be deceiving from the outside. But its quite the contrary when coming to store bought food! They sure might look mouth- watering from outside, but looks are entirely, deceiving sometimes. We don’t want to give them some sort of a disease when all we were trying to do was help. So therefore, the funds would be spent on eco friendly bags, sanitary products, and some snacks too. We will be distributing them every week, so we can bring as many smiles as we can!

Moving on, after we do all the distributing work, we plan on surveying. We would try gathering people’s opinions on some hunger related issues, virtually and physically. We would make a ton of survey sheets for our schoolmates and fellows to fill out, and for the virtual supporters, well, we are going to create an online survey form! That way it would be more convenient for them to share their thoughts on a specific issue. We are still looking further to what more we could do to help finish the destitute. When talking about people our age, most of them nowadays are always busy in things that are straight up time wasting and useless, but they never even dare to take part in something which could affect the globe in a positive way. I highly recommend and urge people of my age, to take part in the Global Goals competition at least once in their lifetime. Or if they couldn’t take part in it due to some reasons, then they could try supporting GSL by doing the most generous and kind acts by themselves! It would be really delighting to see such youngsters willing to bring a change, and trust me, as the leader of VanishingWorldHunger organization, I, myself, have developed many skills by taking part in this and i would surely encourage everyone to take their bit of time to do a bountiful act!

If you are willing to help, but you couldn’t due to the lockdown, then you could donate to GSL, by downloading the app called “Samsung Global Goals” (could be easily found on Galaxy Store and Play Store). The good thing about the app is that you could still donate without any transactions on your bank account by just taking a glance at an ad every time you unlock your phone/tablet! It’s that easy! And after you think you’ve made enough to donate, you could donate to any goal you want to! I recommend downloading that too!! Its a splendid app!

We hope for the best for every project on GSL, and we hope they succeed, as a result of their hardwork and effort!

The 2020-21 GSL Global Goals Competition is now open and runs until June 2021. If you belong to one of the 500+ teams of students currently delivering a social action project as part of the competition we would love to hear from you and feature your blog and project photos on our website to inspire others.

Poverty and how can we prevent it?

WHO WE ARE
Scroll to top