“Sometimes it’s hard to describe the things that change you”

One of my young Global Social Leaders said, as his final reflections of the GSL programme, ‘Sometimes it’s hard to describe the things that change you’.

And, as I sit here in Dubai airport waiting to board my plane back to the UK, to my kids, to my extended family Christmas, I’m reflecting on what that means for me.

I am leaving India ready to go home but also profoundly changed.

I accepted the contract to deliver 3 Global Social Leaders Catalysts in India for 2 reasons. One because I love everything about what Future Foundations are trying to achieve and want to play my part in supporting them to achieve their mission of a new global generation of socially conscious leaders and because I wanted to come back to India.

I’ve been to India once before. I came in 2014, for one of my old student’s weddings and spent 3 weeks trying to get my head around the place, as it’s not somewhere that’s immediately comfortable. It’s a cacophony of sights and sounds and smells and colours and a kaleidoscope of everything that, if I’m honest, is a bit overwhelming. I wanted to see if visiting for a second time would be any easier and give me a better insight into the country, given I had had a small taste of what India is about already and within the context of working, delivering something I’m passionate about, I jumped at the opportunity when the call came in from the FF team to say I’d been successful in my application.

When I stepped off the plane in Delhi (my first time in the city) and was met with the ‘fog’ the pilot had referred to as we were landing, my insides sank and my internal mind chatter went into overdrive, as my physical response definitely wasn’t the joy and elation of being somewhere new. It was cold (!) and the ‘fog’ was smog that sat heavy in my lungs. It was clear that Delhi was going to live up to its reputation of being the most polluted city on the planet and as I sat in the taxi to the hotel I really did wonder if I’d made a mistake accepting the contract.

But, as is the way in India, things have unfolded in the only way they could have!

My experience of working at The Shri Ram School in Delhi, alongside the winners of the Future Foundations 2019 Global Goals competitions, set the tone for the trip.

Before starting the 3 day GSL Catalyst Programme I had the privilege of meeting Nav (one of the brothers who set up One Step Greener) and his Mum Priyanka, who took me on a tour of the One Step Greener recycling centre and their tree plantation site. Not only was I inspired by the tangible impact their initiative is having, but what particularly resonated was the personal story of why Vihaan wanted to set up One Step Greener in the first place.

Vihaan has asthma and in the aftermath of one of Dehli’s biggest landfill fires, that killed 2 people and had a direct impact on the air quality in Dehli, Vihaan’s asthma flared up and he recognised the direct correlation between air quality, how waste is managed and his own health. It impacted him –  so he began a one-man mission to create change, starting in his home and encouraging his family to segregate and recycle their waste. Then, alongside his brother Nav, they expanded their message to the colony in which they live, then to more colonies and finally to setting up the recycling centre where those households that aren’t on the pick up route can bring their waste. Vihaan and his brother Nav have spent time and effort campaigning for their cause, educating people around them and like the landfill fire that was the catalyst for the project in the first place, the sparks of simple action – that are easy to follow and replicate, have now created a glow of change.

Having Nav as part of the cohort of participants at Shri Ram supported the learning of the young people, as they were able to fully contextualise that small things can make a big impact and have a live, tangible example to prove it. It reminded me that social change, always, without fail, comes from our own personal passions or experiences. 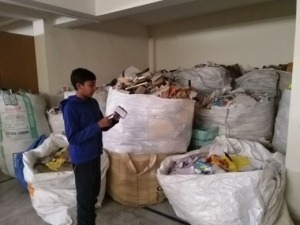 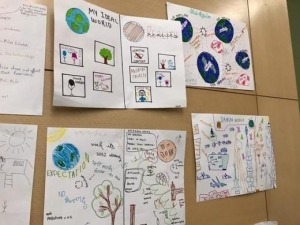 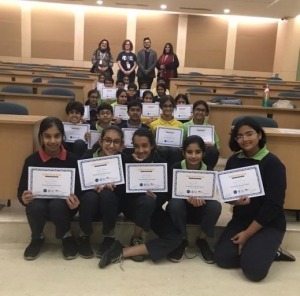 My experience at JBCN Parel, Mumbai, was equally enriching, but for an entirely different reason.

This time the group was small. They were engaged and committed to the journey of the 3 day catalyst and I had many goosebumps, as they too grasped the concept that they can focus on the things that they are passionate about and that their small actions can create a big impact. Idea’s as simple as moving plant pots a couple of foot further out into the road, in order to create footpaths for people to walk on in the busy and congested streets. I was inspired by the simple, pragmatic and realistic ideas from this group and had a sense that they would walk out of the door to start creating change.

What was new for me though was that this group included me as a peer rather than facilitator, by asking me to share some of my own thoughts and ideas as we went through the content of the Catalyst programme. As a facilitator I always respond to what’s in the room, but this was unexpected and very much appreciated. As a result of the group’s desire to include me I realised that my own contribution to the UN Sustainable Development Goals is doing what I’m doing! Helping to develop the Leaders of the future by sparking ideas, understanding and new realisations that they, as individuals, can create change. It reminded me that in order to create change we need others to work alongside, to feedback, to help us continue on our path. 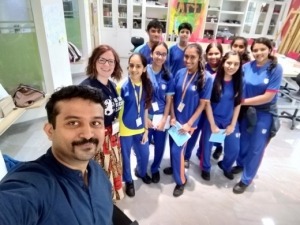 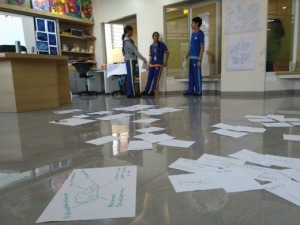 My final experience at JBCN Oshiwara was the easiest to facilitate.

Whether that was because I had settled in to delivering the content, or the fact that this was a repeat programme in the School, there was a palpable buzz from both the young people and the supporting teachers. A few of the teachers fed back that they could already see the impact of running an experiential programme, were surprised by some of the responses from the young people and that they were now viewing these young people through a different lens, that might change the way they teach them. Two of the teachers even said that they wanted to be participants, that they wanted to engage in the content of the programme as they could see how this would benefit them both personally and professionally.

What inspired me most however, was when I saw the symbiotic relationship between the school and these socially conscious young leaders begin to emerge as the young people pitched their ideas in the Dragon’s Den panel, with passion, conviction and clear energy to act and create change.

Their ideas included planting sunflower seeds and Chinese ferns to reduce pollution in the soils, an excess food collection from schools and local colonies to be able to set up a hub for homeless people to collect food and ‘UbBus’ a car pooling concept focusing specifically on public transport and shared taxis, to start reducing the congestion on the streets of Mumbai. I saw the teachers get inspired and offer suggestions and ideas of how to improve the project pitches…to the point where the teachers have also made a commitment to supporting the development of ideas. This reminded me that context also plays a huge part in creating the environment for people and ideas to flourish. 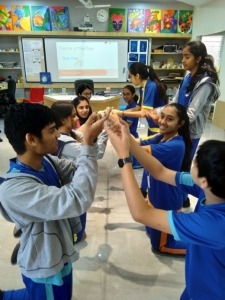 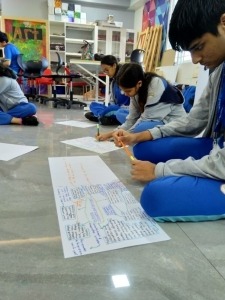 We can all play our part.

A Paw-erful Cause!
Scroll to top