THERE’S NO TIME FOR DELAY

My days in Glasgow for the 26th UN climate conference, also better known as COP26, were a complete whirlwind. Talks, panels, workshops, protests, actions… you name it, and it was there. I was fortunate enough to meet so many incredible people, who were all at the conference for a variety of reasons, but all with the same point of view. That the time is now. We must stand together and unite people and the planet once and for all.

I feel as though I could write a whole book on my learnings, and I was only in the city for four days. So, I have done my best to condense everything into something more digestible. I hope you enjoy!

My journey to Glasgow began on the morning of Tuesday 2nd November, from London Euston train station, where there were a number of powerful advertisements relating to the conference. The most common was a film that read “NO TIME FOR DELAY. THE WORLD IS LOOKING TO YOU, COP26,” and switched between reels of peoples’ eyes – of whom were all nationalities, ethnicities, genders and ages. It really hammered home that the climate crisis is an international emergency that affects everyone. That it holds no prisoners, and that people really need to open their eyes to its severity.

Once I’d arrived, I walked to Strathclyde University’s Student Union (from which I would be hosting a Global Social Leaders session from the following day) and noticed almost immediately that the city wasn’t as busy as I expected – especially in comparison to London. I was informed later that due to the number of roadblocks, police presence and sheer scale of visitors, the majority of local residents were staying out of the way. 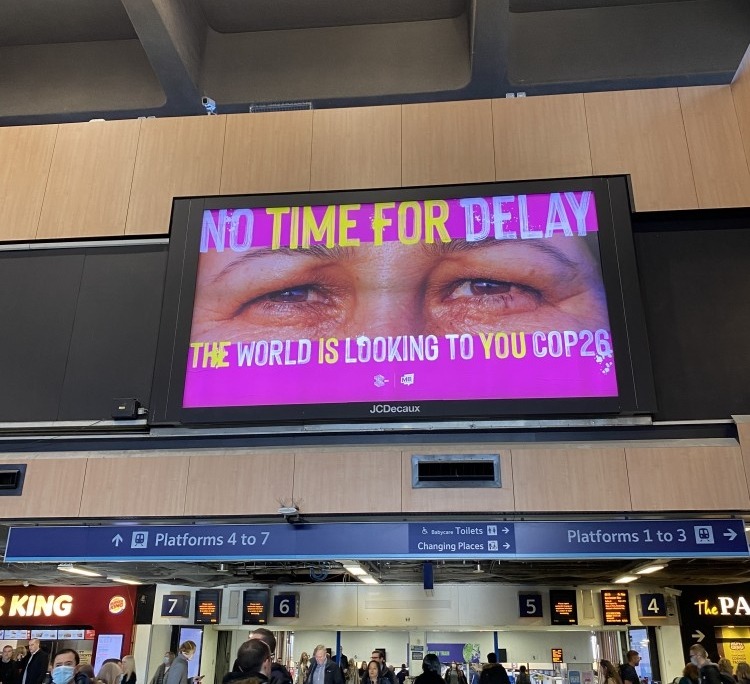 Strathclyde Union was a vibrant, modern, almost futuristic space with a great atmosphere. The building had been taken over by After the Pandemic (ATP) for the full two weeks of the conference and renamed the ATP Youth Hub. Their programme was jam-packed with workshops, talks and performances which were free for all and aimed to enable everyone to take part in the climate discussion and drive positive action – through the power of creativity. It was home for several organisations (including the Creative Bravery Collective, PechaKucha, LEGO Group and Ellen MacArthur) who were running sessions and exhibiting from there during COP26.

I made the short walk back to my accommodation – breathing in the cold, fresh northern air, grateful for my safe arrival in this new city.

I returned to Strathclyde Union in the morning, to attend one of the Lego Build the Change workshops, delivered by the LEGO Group, Creative Bravery and Ellen MacArthur. It was open to school children and teachers ready to tackle climate change through play and “RETHINK, REIMAGINE and REDESIGN” the world around them. The children that were there were from local Glaswegian schools, and were hugely enthusiastic. Creations were displayed in the ‘Grow Room’ (see image) which was a structure curated by a team of students from Edinburgh Napier University.

Next, I went to visit the #GetOnWithIt team, who were part of the programme and campaign run by PechaKucha and the Creative Bravery Collective. #GetOnWithIt is all about providing young people with a platform to show policy makers during COP26 that their voices and opinions matter. Take a look of the picture of me at their social media booth, and my #GetOnWithIt statement.

The Global Social Leaders session was 14.30-15.30 that afternoon. It was a hybrid event which was delivered to a live audience of students, educators and members of the public, but was also available to watch online. Two incredibly passionate members of the GSL movement spoke as part of this event, sharing their stories of climate action and how they are making a difference in their communities. Cherry joined us from South Korea, and Tanasha from the Philippines, even though it was extremely late at night (11.30pm and 10.30pm respectively)… time was not going to stand in the way of ensuring their voices were heard!

This was my first time speaking on a stage… to a live audience… with a microphone… and all at COP26. Need I say more?! It was a nerve-racking but truly amazing experience – the highlight of my career so far. I was so proud of Cherry and Tanasha, and also of the FF and GSL team for working so hard to make it happen. 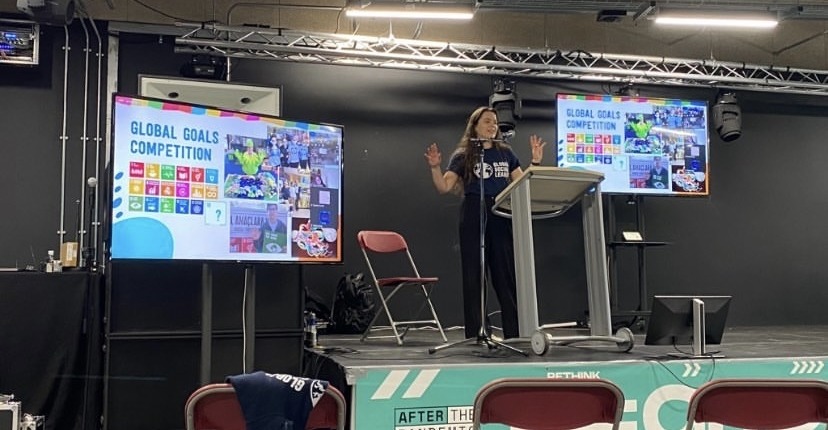 With adrenaline pulsing through my veins, I headed off to the Extreme Hangout, which was as cool as the name suggests! It was located on a repurposed docked ferry on the River Clyde, and described as “a space for engagement, inspiration, education and entertainment, with an overall goal to help drive the younger generation’s vision for a sustainable future.”

Wednesday’s theme was “Sport for Climate Action,” and I went to see the “Athlete Activist” panel event. It was a brilliant discussion which explored what athletes and sports fans alike are currently doing, and could be doing more of, to support the climate movement and enact real change. It was facilitated by Radha Balani (Director of Design and Facilitation at ThinkBeyond), and panellists included:

After a long day… it was time for bed! 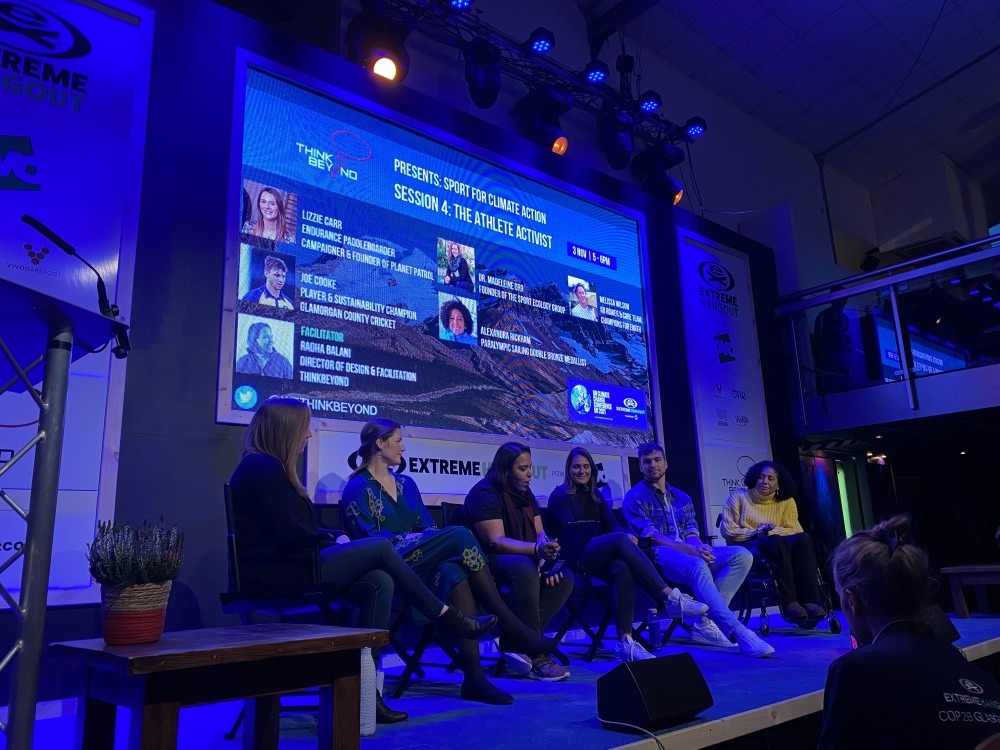 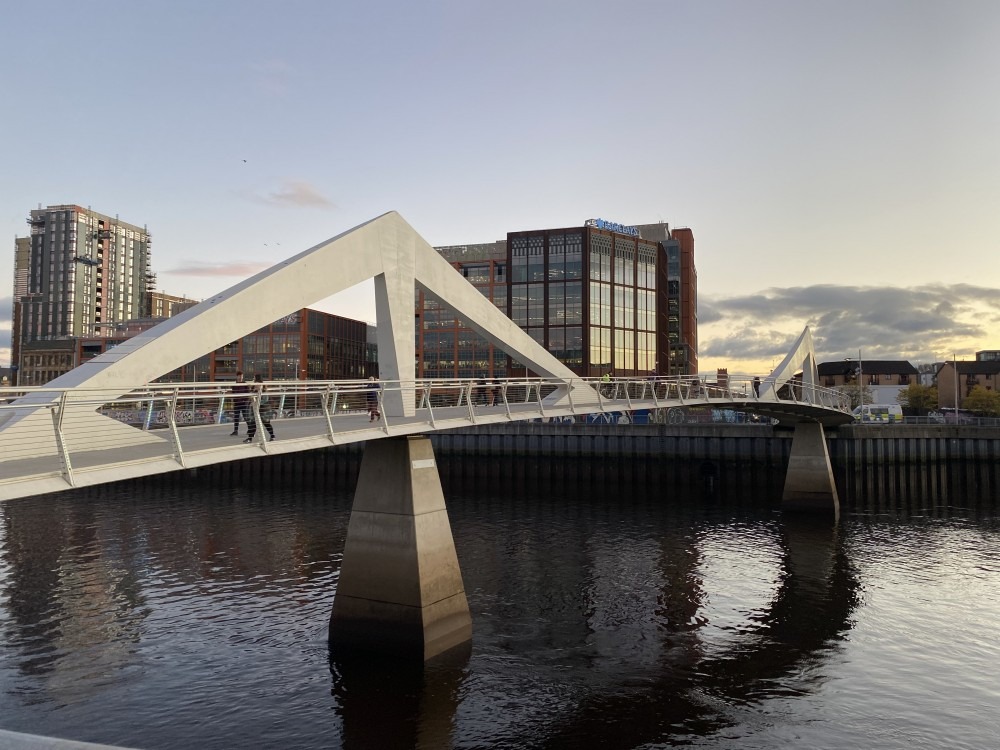 When I woke up, I didn’t think that the day ahead would impact me in the way that it did. I had a ticket booked for a panel event entitled “The Power of Knowledge: Girls’ Education as an Accelerator of Climate Action” at The New York Times Climate Hub. Malala Yousafzai (Co-Founder, Malala Fund), Vanessa Nakate (Member, Generation Climate Initiative and Climate Justice Activist) and Leah Thomas (Founder, Intersectional Environmentalist) discussed how girls’ education is a powerful tool for climate action and justice. It was hosted by Katrin Bennhold (Berlin Bureau Chief, The New York Times).

The venue had 197 trees and plants decorating the room, which were to be replanted in Glasgow following COP26. The installation, entitled “Conference of the Trees,” was curated by Es Devlin, and gave the room a magical, fresh atmosphere.

Malala opened the discussion with some hard-hitting statistics, one being that in 2021, four million girls have been at risk of losing their education due to climate disasters. Vanessa went on to talk about the role of women and girls in Africa, and how so often many are at the front lines of climate disasters. They are the ones travelling to collect water and firewood for their families, and many face the risk of dropping out of school to help with recovering crops and livestock after a drought.  The panel also explored the intersection between gender and the environment. Leah gave a great explanation of eco-feminism and stated that we need to look at all different identity aspects and use them to be stewards of the environment.

These three young female activists made it crystal clear WHY girls’ education, gender equality and climate action are so intrinsically linked. What I took away, was that we need to listen to the voices that have been directly impacted by the crisis, that education is the key to action and change, and that “you cannot be a climate activist today without being a feminist.”

Once the talk had finished, I made my way out of the venue, only to be stopped by a security guard. He asked me why I was leaving, and suggested that I stay, as there were going to be “some very important people” coming onto the stage next. I was somewhat confused, as there was nothing scheduled for a few hours, but he reassured me that it would be worth my while to stick around. So I did.

After around 10 minutes of waiting, one by one, climate activist after climate activist, they took their seats on the stage. I could not believe what was happening! Greta Thunberg, Malala Yousafzai, Vanessa Nakate, Daphne Frias, Dominque Palmer, Tori Tsui, Mya-Rose Craig, Viviam Villafana and actor Emma Watson were sat before me. It was overwhelming!

The panel was opened by Amanda Gorman, who performed a new poem entitled “Earth Rise.” It was mesmerising and captured every thought and feeling that I had (and didn’t know I had!) about COP26 and the climate emergency. The panellists discussed intersectional climate justice and the future of leadership in the climate movement. They argued that collective, coalition-led leadership is the most conducive to the intersectional thinking that the climate challenge requires.

As it was a surprise panel, there was no media frenzy, which I think made it feel extra special. I know in my heart that I witnessed a piece of history on that day. I was honoured to have been the room. It was a beautiful moment with such powerful women that I will remember forever.

In the morning of my last day, I tuned into the The Great Big Lesson for Climate & Nature: Live from COP26. It was a huge and interactive online lesson, broadcast live from COP26, for secondary schools, sixth forms and colleges across the UK. The lesson was delivered by AimHi Earth, Nature4Climate, World’s Largest Lesson & YOUTHTOPIA with support from Cambridge Zero and the Eden Project. At the end of the hour, Matthew Shribman, Headteacher of AimHi Earth, quoted Rob Hopkins… “It all starts with imagination.” If we can’t imagine a better future it won’t be solved. This has really stuck with me, and reaffirms the point that there is so much power in creativity.

I then jumped in an UBER and met with three members of the UK Schools Sustainability Network (UKSSN) at St Peter’s Primary School, to discuss all things COP26. Jack, Grace and Abi had travelled up to Glasgow the day before, with 17 other members of the network and a group of adult supervisors, including Mary Leonard who joined us for the meeting.

The UKSSN is made up of approximately 200 young people from individual climate and sustainability networks in regions across the UK.  At the conference, students featured in the blue ministerial and green civil society zones with partners PPL PWR, Ucell and Climate Psychology Alliance, supported by Global Action Plan, the Royal Society of Chemistry Outreach Department and UKSSN member schools.

I was particularly excited to meet Jack, as he is a member of the GSL movement. He took part in the GSL Global Goals competition in 2019-20, represented GSL at the infamous Fridays for Future march in Bristol which was lead by Greta Thunberg, and was the first ever guest on the GSL Podcast.

We had a great conversation which left me feeling so inspired. You can read it here.

The end of the meeting coincided beautifully with the Fridays for Future protest, which was in full swing by the time I had walked back to the city centre. Thousands upon thousands of people (later reported 30,000) marched from Kelvingrove Park to George Square to demand climate justice at COP26. There was an incredible vibe and energy. People of all ages were getting involved – chanting, singing, making their voices heard and demands known.

As I sat on the train, returning to London, I couldn’t believe the trip was already over. It passed in a blink of an eye. I am so grateful for the once in a lifetime opportunity and will treasure the memories and friendships made forever. I will leave you with my three words/phrases of the week: