We are delighted to share a blog written by Stephanie Crich, a student at George Heriot’s School who is part of a team delivering a Global Goals project for the 2018-19 Global Goals Competition.

Their project is among over 800 social action projects currently running as part of the GSL movement and we are excited to be supporting them to design and lead positive social change in their community.

7 of us meet on a weekly basis to discuss our ideas and next steps. We spent lots of time debating which global goal to choose. There are lots of great contenders which make to pick one to try and make a difference with. Our initial idea was to focus on deforestation in general relating to the Global Goal Number 15 before we realised that a major issue surrounding deforestation was the use of unsustainable palm oil.

We felt passionately about this issue because not only does it affect our planet, it affects our future. We soon became interested in this idea and began to brainstorm ideas for fundraising and awareness. We began by creating and sharing a presentation to 1000 young people from George Heriot’s School; in this presentation we outlined the dangers of unsustainable palm oil and how to cut down on the use of palm oil. Shortly after this we taught 8 classes of pupils between the ages of 13 and 14 and went into more detail about these issues.

These lessons were warmly received by the classes and they all enjoyed learning about how to help prevent using palm oil. We also held a bake sale in aid of adopting three orangutans; due to the support of many people we managed to raise over £87! We have written to a number of MSP’s including Daniel Johnson and Ben Macpherson. We felt that raising this issue with MSP’s would be a good step towards reducing unsustainable palm oil. When we received replies, they were very helpful and had positive messages, such as:

I would be happy to raise this with the Scottish Government and ask what they are doing to tackle the use of unsustainable palm oil.

I am pleased to say that in 2013 the Scottish Government took the decision to remove all products containing Palm Oil from its ‘home run’ catering and kitchen facilities.

We were required to overcome many challenges during this challenge, from coming up with fundraising ideas to gaining an interest and passion for the cause. We found that the easiest way to overcome these hurdles was by working together as a team and involving everyone and all their ideas.

It has been a great experience for the whole team, and we have had so much fun working on this great cause together with all our friends! Personally, I have been able to greatly increase my presentation and performance skills through this process. This was mainly due to the citizenship lessons that we were able to teach to our peers. This is just one of the many skills I have developed as a result of my participation in this competition. 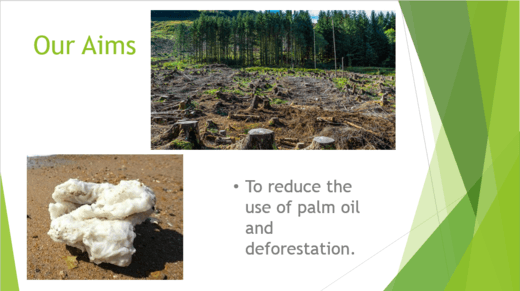 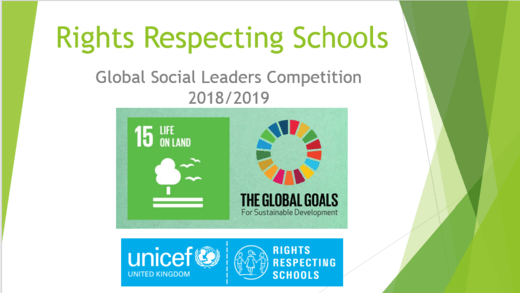 During the citizenship lessons I found that sometimes people weren’t listening or thinking seriously about this important matter, so we found that we had to argue our case and help them to see just how key this issue is. Aside from this issue, we received some very positive feedback from pupils including:

…it was a really good and informative lesson, filled with facts that I had no idea of. It was very interactive, the [game] section at the start was really fun…

…the lesson was very informative and helped convey the seriousness of the issue whilst also maintaining a light and convivial atmosphere.

We have several things that we will be doing in the future with regard to this competition, these include; writing letters to supermarkets about their use of palm oil in products; raising more money to adopt an orangutan and finally two pupils from the group will be going to a conference later in April to discuss the work that we have been doing and what we aim to do in the future.

We will definitely be carrying on this work after the Social Leaders Competition is over and this has been a wonderful experience for us, and I would absolutely recommend that other young people get involved in this competition!