Welcome to the GSL

On this page are some examples of Pledge, Publish and Power Challenges from previous GSL Catalysts.

We hope these will help to inspire you when creating your own challenges!

For Pledge, we challenge you to raise funds for a charity or organisation of your choice. Below are some examples of how other Global Social Leaders have fundraised.

Drew focused on developing his nonprofit organisation, 5Help Foundation, that he co-founded at the beginning of the COVID-19 pandemic with his 14 year old sister. 5Help supports small businesses, the elderly, front line heroes, veterans, children and families in need, the homeless, and those with disabilities… all ‘$5 at a time.’ Using the skills and knowledge Drew acquired on the GSL Catalyst programme, in just 30-days he…

Harshita is passionate about protecting stray animals from harm. As part of his independent challenge, he raised money for a local charity – Ningbo Stray Coalition – which works to save and support stray animals in the area.

Spirit Week is an annual event in Harshita’s school calendar where students pay to wear non-school uniform every day. He decided to encourage his peers to pay ¥10 to dress up on Wildlife Wednesday, coming as their favourite animal or wearing animal print.

How much was raised? £0 – Abbie raised awareness of the need for food donations

Due to COVID-19, people in Abbie’s local community were struggling and poverty had increased drastically. At the beginning of the pandemic donations to her local community centre were high, however, as time went on they started to drop in numbers despite it still being a very prevalent issue.

Abbie decided to raise awareness by making people aware of the need for donations, and also the great work that Albrighton Community Centre do on social media and on email chains with members of the community. She also encouraged people to volunteer their time to work at the foodbank.

Her efforts resulted in an increase in donations, and also new people stepping up to volunteer! 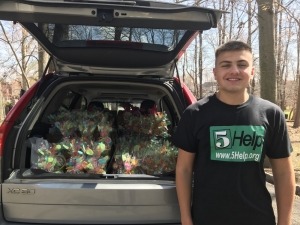 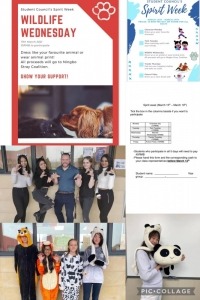 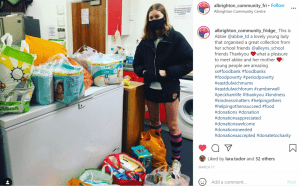 William chose to support the World Wide Fund for Nature (WWF) – a leading organisation in environmental conservation. He set himself a 100-day running challenge – his aim was to run 5km every day for 100 days. He started his challenge in August and will complete it on the 24th of November. He set up a Just Giving page for donations, where he has been posting his running routes everyday!

Charity/Organisation: The Bridge at Leigh

Abigail chose to support The Bridge at Leigh – a charity that aims to reduce food waste, food poverty and social isolation. Recently, the Bridge at Leigh was broken into. Abigail wanted to support them to repair the damage, as they had supported her family with food deliveries during lockdown. Abigail made posters that she put up in her local area and shared on social media. After completing her walk, The Bridge at Leigh were so grateful that they gave her an award for her fundraising!

Angelica chose to support The Wallich – a charity that supports and helps the homeless and is a local organisation to Angelica. She made 140 keyrings/magnets and sold them for £1 each on her drive way to raise money. She also created a poster to raise awareness about homelessness and the work of the Wallich. 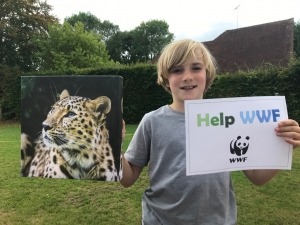 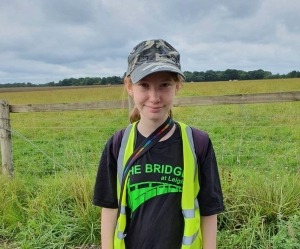 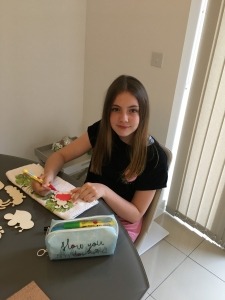 Alexander chose to support Campaign Against Living Miserably (CALM) – a leading charity in Suicide prevention. He raised money by completing a 75km bike ride from York to Easingwold and back. He completed the bike ride in 3 hours and 36 minutes! Alexander set up a Just Giving page for donations to CALM and explains there why he chose to support CALM for his challenge.

Janani decided to raise money for the charity Heart to Heart that supports Children to receive Heart Surgery and organised a Bake sale at her school. She received support from the Charity Committee and other student volunteers to run her bake sale. Janani created posters to advertise her bake sale and arranged for different people to make and sell their cakes.

Federico and Jonny created a JustGiving to raise money for Greenpeace through donations. They also organised a Zoom meeting, with some close friends and family to tell them about the problems in the Amazon Rainforest and the work that Greenpeace are doing to try and save the rainforest. 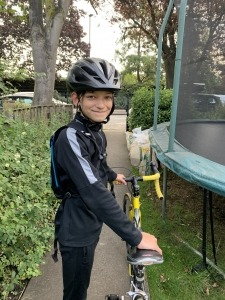 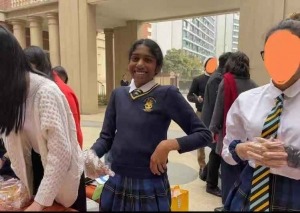 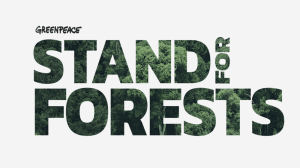 Publish challenges you to create a  poster, a blog, a short report, or a 3-minute digital submission, to raise awareness about a cause or an organisation and the work they do. Here are some examples of the types of things you could do for your publish challenge.

Click on the buttons below to see some examples of blogs and reports written and published by other Global Social Leaders.

Videos are a great way to visually communicate your message! Take a look at those that have been created below as part of previous independent challenges.

Podcasts from previous GSL Catalysts have been released on our podcast channel. Click on the button below to be directed to our Spotify and have a listen!

For Power, we challenge you to create your own project or campaign. Or, you could select an organisation or charity that you would like to support and come up with a way to raise awareness and build more support for their work. 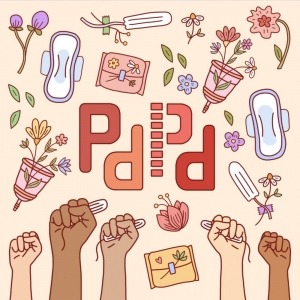 For the first part of her challenge, she planned, wrote and began illustrating a children’s book (for ages 6-9) about what menstruation is. This would help educate them from a young age – learning what will happen in their bodies, and that periods are not ‘scary or gross.’ The second project is called “The Period Poverty Pixel Project”, also known as PPPP. The aim of this project is to get 528 people to take action against period poverty and start a ripple effect that will grow into a global movement.

Kyeong-Min also wrote a blog for the GSL website to inform more people about what she is doing, and by this she has also spread awareness on what period poverty is and what other issues surround menstruation, such as myths, stigmas, secrecy and more. Read her blog below! 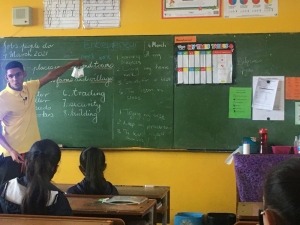 As part of his independent challenge, Michael launched ‘Teaching Entrepreneurship.’ He committed to one week of active research and two weeks of active teaching (volunteering) at a local primary school in his neighbourhood, where he delivered a workshop focused on equipping children born in disadvantaged communities with an entrepreneurial mindset.

The entrepreneurial mindset workshop helped the children to think more creatively, handle setbacks more effectively and be more curious about the world around them.

In addition, Michael put together a short film (featured above) titled ‘Entrepreneurship as a Tool to End Poverty,’ and also wrote the below article about his experience. Click on the button to read it! 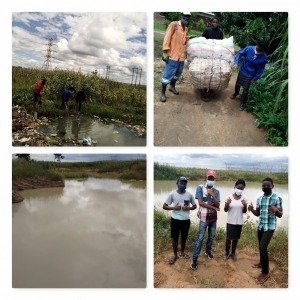 Kudakwashe began a social action project which aimed to reduce environmental and water pollution in his community.

The main focus of the project was to collect recyclable litter from the outskirts of his residential area and surrounding water bodies. In addition, Kudakwashe educated local children and adults on the awareness of the dangers associated with not managing litter well, encouraged them to separate their waste for recycling, and promoted cooperation among the community members.

“From the project I learnt to look at my community as someone who wants to make a positive change but not as a critic.” 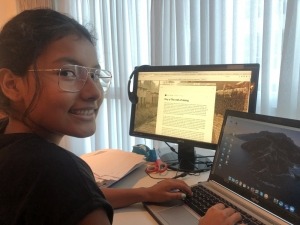 Rosa supported the charity Children First for her Independent Challenge. She set up her own website and launched a fundraising campaign! She spread the word through posts and videos on social media, and asked her friends and family for their support and donations. She raised a total of £680!

Rosa also decided to write blogs and share them on her website. She challenged herself to write a blog everyday for 10 days, to raise awareness for the charity and their work. In each of her blogs she tells the story of a child that they have supported and her thoughts on their story. 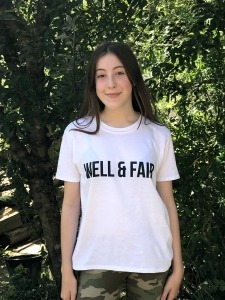 Isobel supported WWF for her independent Challenge. She decided to raise money by cycling 10km every day for 30 days and set up a Just Giving page where she has raised £510.

She used social media to share her fundraising and created her own website called Well & Fair. On the website she has written blogs about endangered animals and the impacts of climate change, as well as about going Vegetarian for her 30 day challenge. On top of all this, Isobel created a Well & Fair t-shirt as you can see below.

Click on the button below to be taken to Isobel’s website and to read all of her blogs! 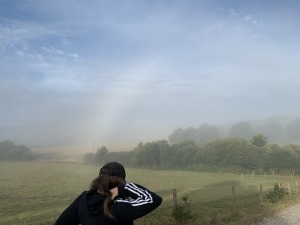 Kitty supported SafeWise – a local Road Safety charity. Kitty was involved in a road accident before lockdown and was struggling with PTSD as a result. In order to help her regain some confidence on the roads, Kitty and her Mum thought it best to keep trying everyday to walk and face the challenge of the roads. This led to her making this part of her challenge and decided to walk or run a Marathon distance every week for 4 weeks. She gained sponsorship from her family and completed over 4 marathons in 4 weeks! Kitty contacted SafeWise to tell them about her challenge. They were very supportive and plan to use the money raised to promote their safety messaging.

In addition, Kitty gained the confidence to provide the Police with a Victim Statement for the upcoming prosecution of the driver that caused the accident.

“It was really hard to do but without this project I don’t think I could have done it. I have made the little changes myself by facing something that really scared me (and still does), and I have been able to talk to friends and family about the importance of road safety. I hope to continue this in the future.”

Find out more
Scroll to top